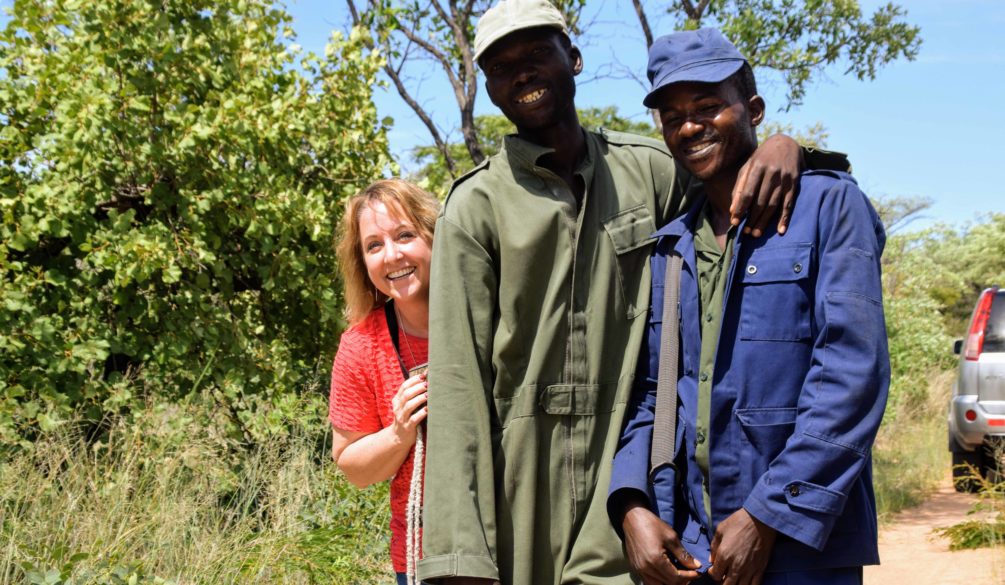 By the time the park ranger warns against wearing red, it’s too late. He tucks my friend in line right after him, hiding her bright shirt behind his camouflaged green. And his big gun. We hope it will be enough.

We wind down a rutted dirt road, then veer off into the bush. Grass swishes around our ankles as insects lift a cacophony.

Our guide lifts a hand to his mouth and begins to make a sound sort of like a whale. Then he instructs us to walk very quietly, lifting our feet high and setting them down gently. He turns and points ahead as large gray shapes emerge from the shadows. He continues to call out to the white rhinos, but they charge off into the forest. We follow.

Not long after, we spot them once again. A mama and her baby grazing in bushes. The park ranger continues to reassure them in their own language that we come in peace. We hope they believe him as we creep closer. They ignore us as we stop and take photos.

The ranger turns and whispers, informing us about the danger of poachers. Turns out the white rhino probably needs more protection from us than we do from them. While black rhinos are known for aggression, white rhinos tend to be placid. Poachers sometimes offer huge rewards to rangers to step aside so they can kill the animals and steal their ivory horns. If the rangers refuse, poachers have been known to kill the humans to get them out of the way.

Now that we’ve captured photos as trophies to carry home, we make our way back to our vehicle, paying more attention to the trail. We notice animal tracks in the dust, scat, and a large bone.

“I wonder who that bone belonged to?” asks my friend wearing the red shirt. Without missing a beat, my other friend replies, “The last person who wore red.”